Mutualism is the technical term used to describe a relationship between organisms from which both parties benefit. For example, bees benefit from the nectar provided by flowers, when the flowers themselves are pollinated by the spread of their pollen to other flowers. It differs from symbiosis, a word which is often used alongside mutualism, as symbiosis instead is defined as the living together of unlike organisms (de Bary, 1879). There are a number of examples of mutualism in nature – but these relationships are often threatened by external influences, such as climate change and anthropogenic development.  This post will take a look at some examples of mutualism between animals, plants and fungi, and discuss some of the ways through which these associations are being affected.

One textbook example of mutualism is the relationship between clownfish (a type of anemonefish) and sea anemones, made famous by the film Finding Nemo. Sea anemones are some of the most venomous organisms on earth, yet anemonefish can tolerate them. Living amongst them offers greater protection from predators, protection of fish eggs, removal of parasites and nourishment from anemone tentacles (da Silva & Nedosyko, 2016). In return, the anemone hosts have enhanced defences from predators such as the butterflyfish (who are fiercely chased away by the clownfish, (Litsios et al., 2012)), improved survivorship and improved asexual reproduction (da Silva & Nedosyko, 2016). 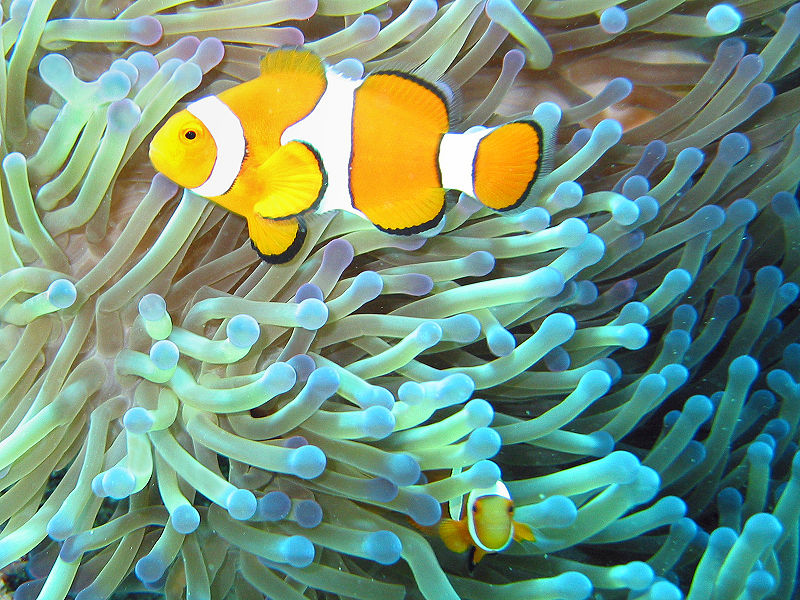 Clownfish are protected from the venom of anemones by a protective mucous coat which prevents contact (Litsios et al., 2012). The association that this protection allows has a huge role to play in the lifespan of the fish: though an average fish of that size might live to its fifth birthday, a clownfish may still be swimming at 30 (Litsios et al., 2012). However, this relationship is changing: long-term declines in habitable sea anemones have been observed across the world, negatively affecting the fish which depend on them (McVay, 2015). These declines are linked to widespread coral bleaching and ocean acidification, as climate change stresses the corals to the extent that they expel the organisms which support them and give them their colour (da Silva & Nedosyko, 2016).

“As giant sea anemone populations continue to shrink in the Red Sea and around the world, the organisms that interact with them both directly and indirectly will likely also experience local to regional extinctions, as the available habitat that these reef hosts provide diminishes.” – McVay, 2015

An example of mutualism from the non-animal realm is the relationship between mycorrhizal fungi and plants (Hoeksema et al., 2010). Connections are made between the roots of the plant and the hyphae, which are the similar root-like structures of the fungi. Most of the time, plants exchange carbon from photosynthesis for nitrogen from the roots of their fungal friends, however during early seed development, the fungi may also supply carbon (Cameron et al., 2008). Around 10% of plant species are dependent on this initial carbon supply from the fungi for their survival (Leake & Cameron, 2010).

Both the plant and fungus have a fine level of control over their exchange of resources, and are able to reciprocally reward or punish cooperation – for example if a fungus tries to take too much from the plant, the plant can reduce its oxygen supply and suffocate it (Kiers et al., 2003). And, in times of lower or more variable water conditions, fungi can moderate and even increase the plant’s nutrient acquisition in response (Bowles et al., 2017). This moderation can help increase plants’ resilience to changes in rainfall and temperature, and in a world that is currently warming, this is vital to survival (Bowles et al., 2017). 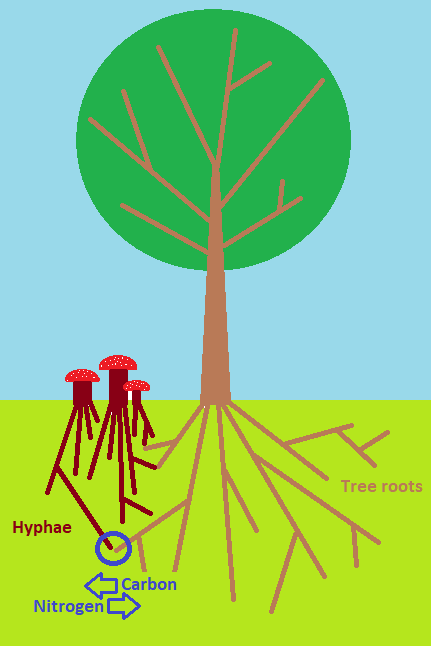 These two examples are pretty well known. But mutualistic relationships between social vertebrates are rare, which is why this next example is so interesting (Anne & Rasa, 1983). In Kenya, dwarf mongooses work with hornbill birds when searching for prey, and to alert each other to danger. For example, when a raptor is spotted, mongooses will guard hornbills to protect them from harm. In exchange, hornbills vocally warn their four-legged friends about predators, even when they themselves would not be hunted (Anne & Rasa, 1983). Such behaviours are altered depending on the number of birds and the numbers of mongooses, so that each group can provide the best protection to the other (Anne & Rasa, 1983). 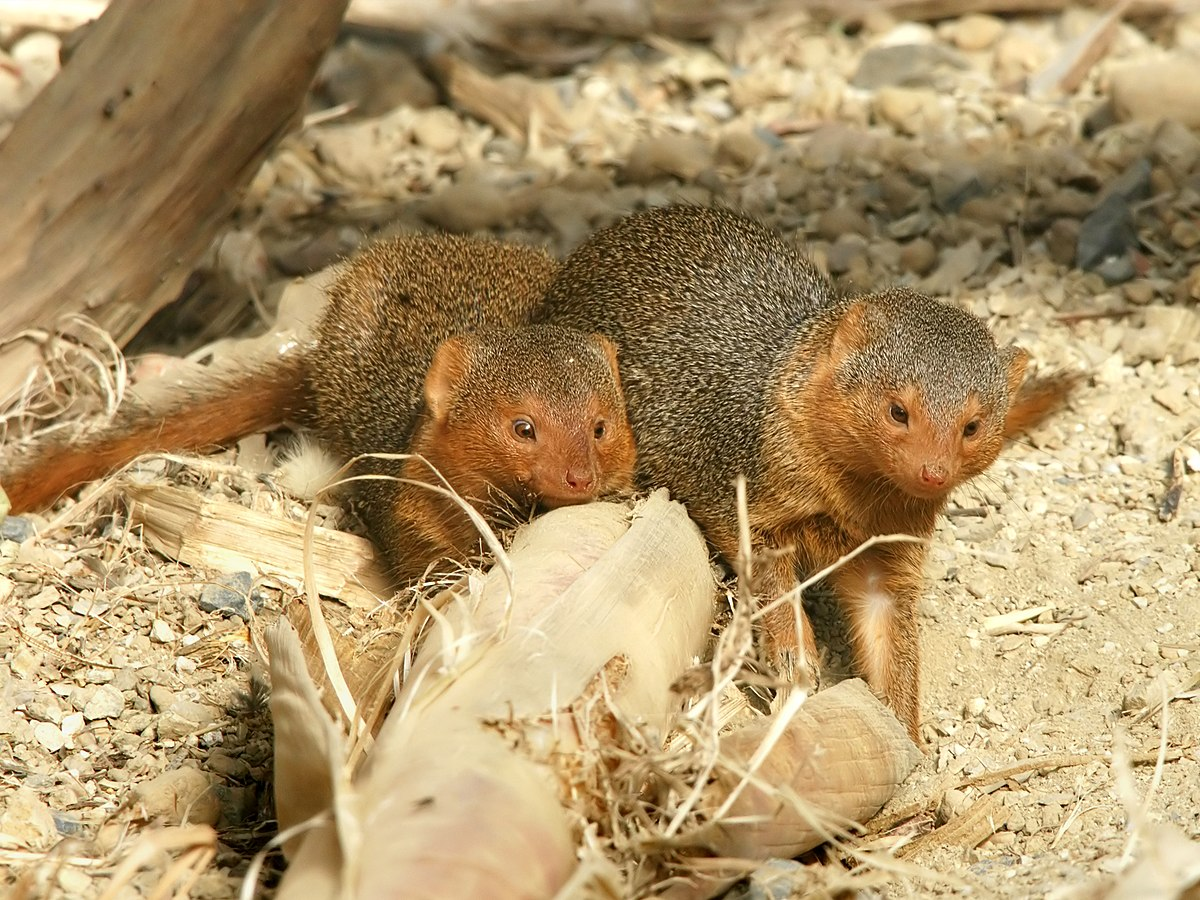 Because vocal calls are vital to the connection between these two species, anthropogenic noise pollution is a critical threat to their defences (Morris-Drake et al., 2017). Mongooses also listen to the warnings of chacma baboons and tree squirrels for alarm signals, so when they are distracted by other noises, the warnings could be ignored. Anthropogenic noise can mask alarm signals, diverting attention from authentic calls and increasing perceived danger, causing stress to the mongoose and subsequent behavioural changes (Morris-Drake et al., 2017).

For this mutualistic relationship to survive, anthropogenic noise must be controlled or eliminated. One method of reducing the impacts of noise is by using noise barriers, which are vegetation or physical barriers which have been shown to significantly reduce noise levels (Slabbekoorn & Ripmeester, 2008). But where noise levels are associated with human activity, the economic value of the activity will almost always be prioritised over mitigation measures.

Mutualism is a vital aspect of many species survival and without this collaboration they would suffer. Humans are also reliant on some of these mutualisms and understanding these links can also bring benefits to us. For example, the mycorrhizal fungi aid carbon storage, as when their deep hyphal (root) networks decompose, the carbon remains in the soil for up to decades (Treseder & Holden, 2013). Fungal networks can also be crucial for food production – engineering crops to form mutualisms with mycorrhizal fungi may enable them to outcompete non-cooperative weed species, reducing need for herbicides and fertilisers (Cameron, 2010). It is of vital importance that we protect the interactions and species on which we rely, for our own sake as much as for theirs.

This post was written with Green Ambition. Green Ambition is the fantastic environment-themed blog written by Beth, a biology student. She gives clear and concise overviews of a variety of topics from fairtrade and food security to solutions to our current climate crisis. Check out her work at https://greenambition.co.uk/.

Hi! I'm Anna, an environmental science graduate from the UK. My main interests (if you can't already tell from my blog posts) are sustainability, consumption, conservation, nutrition, fitness and food! Lots of food. View more posts